Posted by theunderdogforkids at 10:50 AM 3 comments: Links to this post 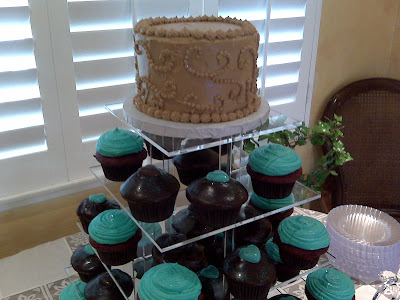 I am very proud to announce that on Sunday, March 29th, Cuppacakes will be participating in The LA Cupcake Competition at the Renaissance Hollywood Hotel. This is where the winner of the BEST cupcake will be announced! There will be about 15 other well known Cupcake Shops I will be competing against which should be quite exciting.

Each Cupcake vendor will make 2 different flavored mini cupcakes, 400 of each! Can you imagine with 16 Cupcake makers there, each bringing in 800 mini cupcakes, which makes it a total of over 12,000 mini cupcakes!! That's a lot of cuppies!

The judges will be well know celebrities and the public! Here they will taste the cupcakes and pick their favorite ones. If you would like to come to this fun event, you can visit the website of the LA Cupcake Competition at http://www.drinkeatplay.com/cupcakechallenge/ The cost of coming and participating in the event and eating as much cupcakes as you like is $40. Part of the cost goes to the Children's Aids Foundation, which I was told. All information is provided in the link I gave you.

I hope I get to see a lot of you there! It should be a fun event and who knows, Cuppacakes could be crowned LA's best Cupcake maker!

Thanks for supporting Cuppacakes!
------Rose
www.italiancuppacakes.com
Posted by theunderdogforkids at 8:37 AM No comments: Links to this post