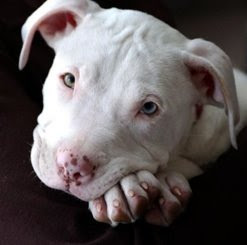 TWO SAD INCIDENTS IN SAN PEDRO RECENTLY MAKES ONE WONDER WHAT WE SHOULD DO ABOUT PIT BULLS AND OTHER DANGEROUS DOGS? SHOULD THEY BE CONSIDERED LETHAL WEAPONS THAT OWNERS MUST REGISTER?

It was just another tragedy unfolding last week. The sun was shining. The boys played Wiffle ball happily outside as the June gloom of San Pedro days began to fold away to hazy summer afternoons.

The family cat, Oreo, hung out lazily on the porch seeming to watch the boys smugly. A sense of happiness clung in the air because the last day of school was around the corner and vacation was running after her heels.

And so, unfortunately, were two pit bulls – and what happened next is why I want the city of Los Angeles to consider forcing owners to register pit bulls -- and other dangerous canines known for aggressive and violent behavior – to be registered with animal control as potential, lethal weapons. I know what you’re thinking: She’s barking mad.

It’s not that I don’t like pit bulls or other dogs with aggressive tendencies. To me, they are beautiful creatures.

But it’s the only way I can see our laws being given more bite, because right now they don’t have more than a “woof.”

Think about these people:

· Diana Whipple of San Francisco, ripped to shreds and killed in February 2006 by her neighbor’s 120 pound presa canaria, dogs the neighbors knew were vicious and aggressive.

· A 12-year-old boy, Nicholas Faibish, was attacked in Northern California and killed by two family pit bulls in his own home. The mother blamed the boy.

· More recently, two pet pit bulls lived with the man they killed -- a 60-year-old Rubidoux resident, who lived with a couple and their three children, two, seven and 12.

All the dogs involved were put down, and crimes were charged against the owners in the first two cases, but why do we have to wait to get to that? Why do we have to wait for people to die, children to be maimed for life – and never mind the mounds of unreported pets that have been killed in vicious attacks all across the nation because we can’t determine the best way to control the situation.

To me, this is a much better solution than doing outright bans on the animals, which some cities have done, or trying to prevent future breeding. Ruling dangerous dogs as potential weapons tooled correctly could bring all sorts of potential actions that could give police and animal control the ability to confiscate such animals and cite owners for neglect.

I am quite sure gang members and other idiots, who use these animals in dog fights, will not register their animals, giving authorities another tactic to swoop on their crimes…where as good pet owners will.

Of course, there’s probably a million and one doggy reasons not to do this, but as I listened to my son and his friend recount their terrifying experience trying to save Oreo, in the back of my mind, all I could think about is what if, what if....they had attacked the boys?

“I was just stunned, just frozen” said one of the teens, whose family did not want to be named. “It was just too much to watch,” as the dogs played tug of war with Oreo hanging from their mouths.

His older brother acted more instinctively, punching one of the pit bulls repeatedly until it let go. And my son jabbed at the other dog with a plastic bat. When it finally let go, Oreo tumbled down, walked a few steps, stumbled, somersaulted and collapsed.

While the teenagers did everything they could to save Oreo, it was in vain. By the time the cat arrived at the veterinarian’s office, both of the feline’s shoulders were pulverized with little chance of recovery.

So I ask, just as Mary Lou Martinez did when her cat, Sylvester, sunning in her San Pedro yard, was grabbed by a neighbor’s wandering pit bull: What’s it going to take? Mary Lou worked desperately to rescue her cat – until the dog turned on her. Another neighbor raced out to help her and when the dog went after him, the neighbor shot the dog to death and is still haunted by it.

As for Sylvester, he also had to be put down.

Perhaps this plan would protect not just the public, but the animals from being used in dog fights – and force irresponsible owners to become more responsible or face charges for allowing their animals to escape.

I’m sure that many pets have been brutally killed by pits that go unrecorded – and it’s hard for some people to understand the pain it causes.

“I am still very upset and that nobody can understand the significance of the loss of the little furry part of our household,” Mary Lou complained in frustration, thanking God her grandchildren hadn’t arrived home from school yet. “My puppy still looks for Sylvester, and the stray cat that (hangs out on the porch) still cries for him at my back door. They slept by each other every night.

“I want Sylvester to have justice.”

To make matters worse, the owner was not cited and yelled: “You shot my dog!” to the neighbor who rescued Mary Lou from possible injuries.

A lot of all of this just comes down to common sense, which apparently many people don’t have. In Oreo’s story, a petite woman walking the two large canines, rounded the corner. When they sensed the cat, they dragged the woman -- whose job it was to walk the dogs -- up over the sidewalk, across the grass and straight toward the feline. The woman then dropped the leash.

In mere seconds, the two pit bulls had each end of Oreo in their mouths. My own 35-pound mutt can drag me – he’s that strong, so why would this walker have taken this job with well-known muscular beasts when she apparently didn't have enough training to handle them??

I have friends who own pit bulls, who are sweet as sugar and the owners are excellent. But still one never knows. Even responsible owners get caught off guard.

One day, as I strolled with Ryan when he was 2 years old, a young couple with a large pit bull told us their dog was friendly and that we could easily walk by. As we started to pass, the dog spotted Ryan’s toddling legs and lunged for him.

The owners were stunned, shock spreading across their faces. Even these owners – good owners -- didn’t understand what a weapon they had on their hands.

Posted by theunderdogforkids at 8:25 AM No comments: Links to this post