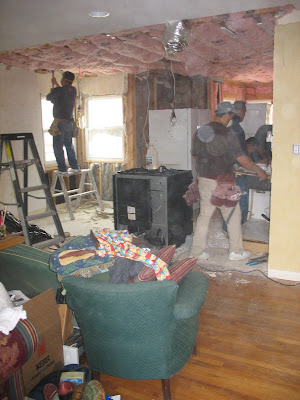 His 6th grade algebra teacher, Sal DiConstanzo, explained that Ryan had not been acting himself the past two weeks. He was snippy, not paying attention, basically languishing in his class – and not caring what happened. He wasn’t even doing his homework or participating! These thoughts immediately shot into my brain; It had to be a bully or a girlfriend who dumped him at school.

I asked Ryan what was going on and he said: “Mom. Look. I don’t want to talk about it. It’s not life-threatening or anything.”

Failing to coax anything him out of him, I dropped the conversation.

But thank God for the warning. A few days later, during parent conferences, two teachers practically leaped out of their chairs and begged me to tell them what was going on with Ryan. It was the same story the math teacher had revealed.

This time, I told Ryan: “You have to tell me, your dad or what’s going on,” because by now, I’m just sure we’ll be marching onto the school grounds asking the school to solve the problem.

Ryan finally spit it out -- and I got quite the education.

Wham! What a wake-up call for us as parents. We’d been sitting around discussing incessantly about our remodel woes – and we hadn’t even started yet – and yes, we didn’t know where we were going to live, and no, we didn’t have any idea what we were going to do with our animals. And it spelled out the one certain thing: We have to remember our kids listen and they listen intently. Whenever we feel uncomfortable, they feel uncomfortable. When we are afraid, they are afraid. Ryan basically was a carbon-copy of our own feelings – and he most certainly didn’t know where he fit in the maelstrom of plans with architects, engineers and a whirlwind of bodies coming in-and-out of our doors.

And I have to remind you – that was before we even really started. We had unknowingly transferred all our troubles to our son, and worse – it was his teachers who had to tell us so. But perhaps that was better, because it was then I realized what a life line our teachers can be to our kids – if – and only if – we listen and become involved in their education -- however, that may be from writing teachers notes to helping on field trips.
Because of these teachers, we were able to avoid a catastrophe as Ryan’s grades were spiraling down and his attitude had become horrifically scary – and hah, I was just sure it was the fault of the school! And believe me, we had absolutely no idea. We were blindsided and surprised by our own inability during that time to connect with our own child.
Afterward, I discussed the situation with those in the business. When I told one architect the story, he said he was taken aback and would now include children in the planning stages of home design.

Another general contractor in town, Tommy Reavey, president of Thomas Towne Reavy Inc., said he learned quickly to include children the hard way. It happened after he was redesigning a house and had demolished all but two rooms.
When the family came to visit their home, the little girl in the family, about 5-to-7 years old, vanished. The girl's disappearance launched a search and when they finally found her she was -- in “her old bedroom in her old bed in a quasi fetal position,” he wrote me via email. She was sucking on her thumb, a habit she hadn’t done in years, and it shocked everyone.

That’s when he learned that while adults could peer into the future and see a final outcome, obviously children could not.

“It was alarming to all of us and left a lasting impression on me,” Tommy wrote. “Now I warn parents that it can be very disruptive and disturbing to a child to have their home torn a sunder. This can be shocking to adults too, but children can't envision the end result and have no knowledge of how a house is built and remodeled in the first place.
"For them it could be like Katrina was to the people of New Orleans. The child for good reasons will associate the stability of the home with the stability of the family, which is pretty much their whole world at this time in their lives.”

Parents using Tommy’s design team are now coached to prepare their children and to look for any signs they might be disturbed by the events circling around them. “We are there for them and want them to feel safe,” Tommy explained.

For children, our world is their world. How we feel, think and believe will be stamped on them and impact their every day lives.

I love the concept of including children in the "thought process" of designing a home.
From all of this, my husband I learned that life lessons are never over -- and that even though we graduated -- it will sometimes be teachers who are still teaching us.