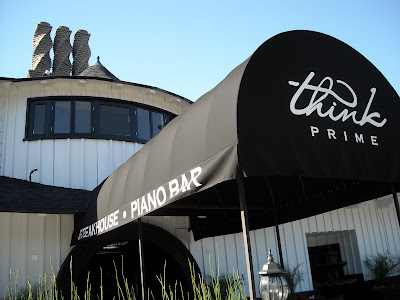 Eating Out With Kids Can Be Tricky, But the New Think Prime’s Jubilant Atmosphere in Rancho Palos Verdes Means Good Food Out With the Family of All Ages – Especially for a Special Occasion; It’s Just Another One of the Entrepreneur’s Dreams, Successes and a Home Run Even in This Troubling Economy

At last, we were there.

“Casual elegance,” sums up it’s charm and is likely the term the successful entrepreneur would use to describe his latest and greatest restaurant that hosts sides such as Kennebeck Shoestring fries and white cheddar chunky twice baked potatoes.

Scrambling into the giant circular booth to celebrate our son’s 15th birthday, the restaurant was jamming on a Saturday evening at We had made our reservations a week beforehand -- and -- that was important thinking.

Looking over the packed restaurant where it appeared everybody sparkled with smiles, it seems once again Kashi had shook off the odds, using his sophistication and understanding of operating restaurants – not only during a tricky recession, but at a location that has not worked for practically anyone else in the past.

Perched on , crunched above and , the location has always been trying at best, and several other restaurateurs had ventured there. None in the past had the right vision, or the following, to endure the setting.

Having known Kashi for years, even we cringed a bit when he announced to he was opening his latest vision – the steak house he’d been planning for years – at the site that once housed the Tasman Sea this past November. We shouldn’t have underestimated him knowing he has garnered a beat and pulse of what the community wants. He has now ushered in three successful restaurants this area, each having a completely different character and all called Thinks: Think Bistro, Think Café and Think Prime.

That gives you room to think.

Brimming with excitement and happy waiters, glowing in the success (the steak house has been packed about every night,) it seems residents here were just waiting for such a dining adventure to descend upon for years and have been coming droves.

Everyone. That means little kids, big kids, grandparents, large groups of friends, and the best part – even though Kashi has always had a soft heart for kids and they’ve always dined in his eateries – there should be little trouble bringing the kids here.

Loud and vibrant, the place pulses with life and due to the noise, makes it an easy task to bring children to this restaurant – where if they don’t like steak, fish or other meat, they can savor their teeth on Chop House Fresh Corn on the Cob, buttery garlic mashed potatoes – and to make the parents happy, savory garden vegetables.

But if you have a kid like ours, he wasn’t going to eat lightly. He and his friend ordered the 8 ounce filet mignon -- $25 each a la carte – and their assessment from our son was: “Yeah, It was great!” They both want to go back – which is the biggest stamp of approval from two teenagers.

For myself, not being much of a steak eater at a steak house, I was pleased that the kitchen was willing to make the TPSH Signature Salad – a medley of “wild forest greens, heirloom tomatoes, julienne cucumbers, jicama, organic eggs (I asked them to leave off the bacon bits) – and top it all off with grilled chicken at my request.

It was excellent. Of course, with my English background, I couldn’t resist the traditional Yorkshire pudding with crispy onion crumbs – something my family lived on for years, minus the onions. Delicate. Scrumptious. And delectable with gravy, the Yorkshire pudding actually rivaled my grandmother’s – and that is no easy task – as she carried her recipe when she immigrated from to .

Having known Kashi since he was once a waiter at the former Grand House –and who foretold us i at his younger age of 20 – that his future plans were to own and operate his own restaurants – we can’t help but be extremely proud of him.

His dreams started with having a neighborhood bistro – as they have in where he once lived – where neighbors would come, sump on a good meal and sit around debating all night about politics and other things. That dream evolved into the small and intimate Think Bistro, tucked neatly into a corner of a shopping plaza on 25th and .

That’s where we first started taking our son when he was an infant and he grew up around Kashi (they both love sports) and our son was spoiled.

One night when Kashi was not in, Ryan was about five, he bustled into the bistro on his stumpy little legs, opened the door (I had fallen behind) and walked into the restaurant as though he owned it on his chubby little legs.

The host was a bit shocked that this stocky 5-year-old had wandered in looking for – who else, Kashi – and demanded him. Kashi always allowed kids and that’s why you will see families coming with their children – often.

As his dreams evolved, Kashi took another great risk opening Think Café – which has a more lively and colorful atmosphere than the romantic bistro – on , formally several other restaurants, including the Petit Casino.

It took about a year, but within that time – and the new addition of a great chef, Sonny, -- the café boomed with it’s flavorful foods – my favorite the macadamia nut salad. Ryan would come with us – and have hot chocolate at the counter with Kashi – debating about sports.

As an advocate for kids, I always look for places where they are accepted and wanted – because whether other folks like it or not – they have to learn how to behave in a restaurant.

It’s a fantastic lesson, and I am pleased to say, that the Think creator has provided that for our son and scores of other children in our communities.