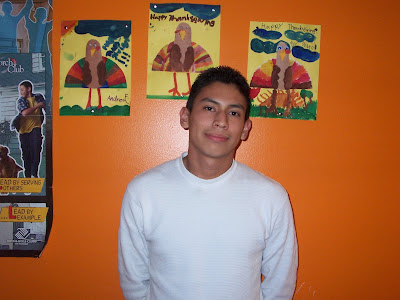 What Am I Thankful For?
Happy Thanksgiving
By Jamie Gonzalez, Port of Los High School senior
As a young child, my parents have taught me that family is everything in one’s life. As the years have passed by, I have learned that this is true. I am thankful for everything my parents and my family have done for me.
My parents are the ones who gave me life and gave me a chance to grow up to become someone important. They have struggled through many years, but despite all those challenges we have all stayed together as a happy family which I am thankful for and will cherish forever.
I am also thankful that God has given my mother strength to take care of me and my three brothers by always having food ready for us so we can have a nice lunch or dinner. I am thankful that God has given my father strength to keep on working in roofing and take care of the whole family financially, but also still being a great father.
Education wise, I am thankful for many great things. I thank God for giving me a chance to go to a great school that doesn’t compare to other schools. If I didn’t go to Port of Los Angles High School, I wouldn’t have met the great friends that I know to this date. I wouldn’t have gotten the chances to go on a onc- in-a-life time trip to Washington D.C., join SRLA, the Spanish club, and also represent my school. But also, if I didn’t join the College Bound program in the Boys & Girls Club of the L.A. Harbor, I would have been lost college wise.
This is why I am thankful that Jenna and Marcey (of the Boys and Girls Club) are always there to help me out and answer my questions about college. Lastly, I am thankful that God has helped my family through the good and bad and has always kept us moving forward. Now that I am transitioning from a teenager to a young adult, I now see how life really is and thank God that he has let me see this.
Posted by theunderdogforkids at 8:20 PM No comments: Links to this post 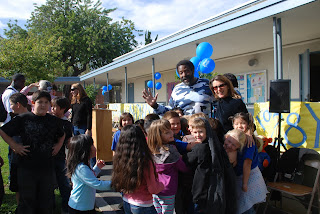 Students give goodbye hug to the plant manager. Alonzo LeFridge thanks Craig "Edward" Dykes for helping him stay on track since he was a 6-year-old. Alonzo now
plays for the San Pedro High School Pirates Football Team. 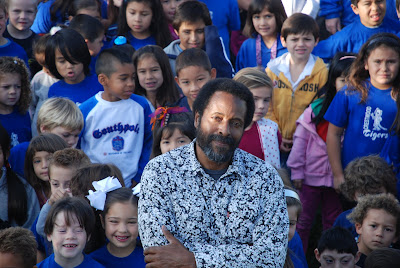 Students at Crestwood Street Elementary School Bid A Great Farewell to the Custodian Who Served the School for 28 years; Good Bye Mr. Dykes
Edward "Craig" Dykes did many things beyond the call-of-duty for students at Crestwood Street Elementary School in Rancho Palos Verdes. He cleaned up after them. He listened to their stories. And for some, he helped instill a good sense of values and taught them responsibility.
It was a bitter-sweet day for Craig, who served his last day at the school as the plant custodian, on Wednesday -- but not before the students were able to tell him the auditorium received a new name in honor of his efforts for nearly three decades.
The auditorium will now be called "The Edward "Craig" Dykes Auditorium" honoring him for not only his work to keep the school clean and safe, but due to the extras he did for so many of the students.
San Pedro High School football player, Alonzo Lefridge, 17, came to thank the custodian on Tuesday for the values he instilled in him when he started at Crestwood at the age of six.
"He always helped me," Alonzo explained, saying the custodian was the reason he raced to school every morning. "He always had a job for me. He taught me responsibility. I watered plants, helped him open doors and put up the flag. He taught me respect. He taught me morals. And he kept me on the right track."
Alonzo was able to thank him along with many other students when the school held a ceremony honoring the plant manager on Tuesday.
The custodian was known for not only putting the students to work, and teaching them -- but he gave them treats -- delicious glazed donuts.
Not only did the school rename the auditorium, but every student received a glazed donut -- a tradition that the custodian established to thank all the students who helped him.
Posted by theunderdogforkids at 7:20 PM No comments: Links to this post