La-Terian Tasby, before he was killed, with Cara Askew, College Bound coordinator, for the Boys and Girls Club. La-Terian was in College Bound and a leader at the Cabrillo club site. 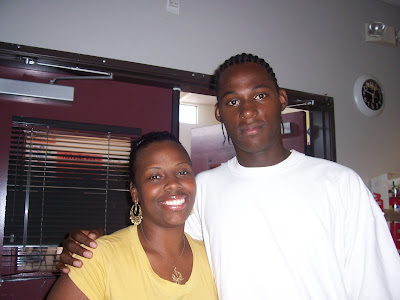 WHAT LA-TERIAN TASBY’S MOTHER WANTS TO SAY PUBLICLY FOR THE FIRST TIME ABOUT HER SON’S KILLING; AND HER THREE WISHES IN REGARDS TO HIS DEATH; SHE FEELS HONORED TO ATTEND THE PEACE VIGIL AT SAN PEDRO HIGH SCHOOL FOR THE 182 MURDER VICTIMS AND WILL BRING HER FAMILY

It’s been almost eight months since her son, a San Pedro High School athlete, was shot and killed by gang members at a party in October. She’s heard two different versions about his death – one is that he went down fighting to protect his friends. The other was that he stood by watching an argument ensue and was shot.
Knowing La-Terian Tasby’s personality, his mother, Rosemary Snead-- who has five other kids but finds that even they can’t patch the bleak hole punched out in her heart-- banks on the first being the closest to the truth.
And that’s exactly why she feels so frustrated with his friends who are too fearful to talk; Stories keep rolling in such as it was a 15-year-old boy who shot her 17-year-old son. Constantly, she finds herself dwelling on the idea that “that boy gets to eat, sleep, laugh, use the bathroom and still get mad at his mom and dad.
“My son can’t do that anymore.”
La-Terian’s death couldn’t have been anymore tragic. Having moved with his mom from Inglewood to San Pedro in 2006 – for a time living with his aunt and uncle and the rest of his family under one roof – Rose recalled the transition she witnessed in her own son.
In the beginning at San Pedro High, his grades were Fs and Ds – atrocious – and he was always “clowning around” in this 6’5” body with size 17 feet. But once the coaches told him he could have a winning shot with sports – both in football and basketball – she watched her son finally settle down.
The coaches prodded him to bring up his grades, so La-Terian embarked on an intense campaign of schooling, including summer school and attending Harbor College classes to make up for his past failures.
“He was so happy,” she explained, “and he was just determined to meet the qualifications.”
La-Terian also became a leader at the Boys and Girls Club where many youth were awestruck not only by his height, but by the fact that cared about them. He constantly listened to the younger kid’s problems.
But that October night crucified all the work La-Terian had done when allegedly gang members crashed an athlete’s party, made racial slurs and started a brawl. Several students said La-Terian moved in to protect them and went down fighting like a soldier right before he was shot in the chest. At least two other youths were stabbed, but did not have life threatening injuries.
The story that La-Terian started to fight for his friends didn’t surprise his mother, one bit, because unfortunately, even though he was as gentle as “a big pussycat,” he didn’t have much fear. He also believed in doing the right thing, his mother recalled. Once when there was a fight at school, he was subpoenaed and asked to testify. He didn’t think twice about testifying, because he wanted the truth to come out, she said.
Even though the charges were dropped in that case, Rose believes to this day that had the situations been reversed – and La-Terian watched someone else get shot – she believes he would take the stand.
“My son put his life on the line for his friends, but if they were true friends, they would come forward,” she said.
She understands the fears the students, who were at the party, face. If they testify, there’s a possibility they could get killed or even put their family members in jeopardy. To survive, it’s likely they would have to enter the eye-witness protection program, uproot their entire family and change their identification.
While she herself is somewhat torn – and doesn’t want anyone to die if they did testify – she still wonders aloud then what has been accomplished. “The fear empowers the gang members to go on killing” more and more – especially if they never face the face of justice. That makes San Pedro just that much more dangerous, she said.
She forgives the killer or killer(s), she explained, because she refuses to walk around with hate. “The gang bangers don’t scare me,” Rose explained. “The only thing I’m scared of is my heavenly father. So I am always trying to forgive and not hate.”
Rose’s three wishes:
--That no one take revenge in her son’s name because “he would not want that. He was not a gang-banger. That’s what gangs do. Get revenge. He wouldn’t want that. He would want justice.” And, she added, that she would never wish that type of pain on any mother or family.
--That someone step forward and take the stand so whoever killed her son would face justice and serve a lifetime sentence. “I don’t want revenge,” she said. “I want justice.”
--That if someone is caught, that that person will pray to God and ask for forgiveness for what was done to La-Terian.
Besides his mother and other relatives, La-Terian is survived by five siblings, Jennifer, 21,Cecil, 20, and twin brother, Darien, 18, all Tasbys; Jaevion Owens, 15, and Johnny Yates, 11.
Posted by theunderdogforkids at 5:23 PM 1 comment: Links to this post