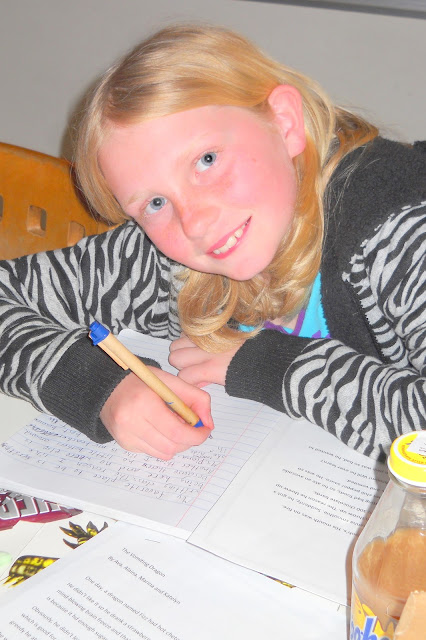 Mallory Garcia attends a Seven Golden Secrets to Writing workshop where she crafted a story about her animals and a guitar.

Student Writes What She Knows When It Comes to Her Fiction Story; And Dana Middle School Holds June Fundraiser for Crohn’s Disease to Aid 17-Year-Old Derek Esquibel in His Fight to Raise Funds for the Debilitating Illness
Write What You Know
Dear Readers: I was really pleased with this story. Mallory is one of my newest students to the Seven Golden Secrets to Writing class. She used expressive words in this work which stemmed from that old caveat: “Write what you know.”  It turns out she owns a bearded dragon and plays guitar.  This gave her some of the best knowledge to craft this fun story. Diana
The Wiener Dog that Plays Guitar
By Mallory Garcia, 10
There once was a wiener dog that played guitar. Her name was Sheila. Sheila had a friend named Tiger. He was a bearded dragon. His orange neck would puff out to warn you not come near.  I have a bearded dragon named Tiger. I named the lizard in this story after mine.
Well, anyway, Sheila wanted to perform in front of people on a stage. But that didn’t go well. One day, Sheila went to Fredrick’s house and left her guitar at home. She forgot all about her guitar. Well, Tiger snuck into Sheila’s house and took her guitar.
He began to play and then: “Screeeeeeeeeetch! Snap!!!!”
Tiger gasped: “I broker her guitar!”
There were only five strings left. As he began to play, his sharp, slick claws broke another string.
“Ahhhhhhh,” Tiger screamed. But even though he was scared, he was going to be torn to shreds, he kept playing. Then three more strings broke. There was only one string left now.
Tiger suddenly heard Sheila running up stairs. He hid under her bed and plugged his ears.
She screamed: “Who broke my guitar? I’m going to rip you to shreds!”
As she turned around, Tiger ran out of the room, out the door and into the bush. She ran outside after him and yelled: “You broke my guitar.”
Tiger said: “What are you talking about. I wanted to surprise you.”
“For what?” she asked.
“I, Um…wanted to get you a brand new guitar because I broke yours and I want to get you a new one. Please don’t rip me to shreds.”
“Why would I rip you to shreds?” Sheila asked.
“Because I destroyed your guitar,” Tiger said crying.
Sheila picked him up, hugged him and said: “That’s OK. I still love you. When do I get my new guitar?”
--------------------------------------------------------
Crohn’s Fundraiser at Dana Middle School Snared More Than a $1,000 with Coins and the Campus Will Continue Fundraising at Acapulco June 7
In honor of its past ecology president, Dana Middle School collected coins for a cure for Crohn’s disease raising $1,046 and will host a June 7 fundraiser at Acapulco at Ports O Call.
Former ecology president, Derek Esquibel, who now attends San Pedro High and has Crohn’s, inspired the school’s current ecology club to raise funds to fight the painful disease, which inflames the stomach and bowels.
Derek was diagnosed when he was 11, said Michelle Fortune, a Dana English teacher, who runs the Ecology Club.
“Derek has been so positive and eager to work for a cure,” Fortune said. “He is one of those kids you meet and are just so glad to know exist in this world. Derek has two types of Crohn’s, a rare situation where he has it in the small and large intestine, but he doesn’t let him get it down.
“He went public with his disease in high school and began speaking about it to raise money for the Crohn’s and Colitis Foundation for America.”
Last year, Derek, who loves to race cars, held a fundraiser for the foundation at K-1, an indoor go-cart racetrack, in Torrance garnering $2,500.
To help Derek to raise money to fight for a cure, go to dinner at Acapulco’s from 5 to  9 p.m. at Ports O Call in San Pedro June 7. The restaurant will donate 25 percent from food sales toward the foundation.
In order to honor the fundraiser, the restaurant wants fliers from the school. Students will pass out fliers outside the restaurant or they can be picked up in the main office at Dana Middle School, 1501 S. Cabrillo, San Pedro.

Posted by theunderdogforkids at 10:44 AM No comments: Links to this post