A Little Miracle in Motion; YWCA Feeds 400 Kids A Pancake Breakfast Saturday With Santa Spreading His Holiday Cheer
By Diana L. Chapman
Luz Flores, wearing elfin clothes, spirited around the youths and told about 100 children at a pancake breakfast what to say to get the Big Guy to come.
“Who are we going to see?” Flores piped up musically. “Santa Claus? O.K. We need to sing Jingle Bells.”
With parents, volunteers and kids clapping and singing  happily, Santa for the 25th year in a row magically appeared on a stage at the YWCA in San Pedro  where children up to 10-years-old plopped on St. Nick’s lap.
Some kids cried. Some giggled. And some seemed actually happy to sit on Santa’s lap. 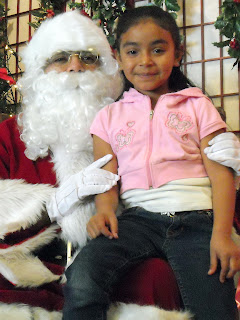 St. Nick took it all in stride as the YWCA staff once again poured out the festivities as it has done annually since 1987. It’s one of the employees favorite times of year because they are markedly doing a service for children, most of whom would get nothing  for  Christmas otherwise.
“My mom is the only one working and we are all living with her,” said 21-year-old Jessica Gonzalez as she sat outside with her two little girls, Mayah, 4, and Alyjanae, 2, waiting for next seating.  Her husband, Derian, “and I are both in college. We tried to get jobs. We’ve been applying to Target, Ross, Payless and Pizza Hut.
“We didn’t even get call backs.”
For Mayah and Alyjanae the gifts they receive at the Y this year may be the only presents they will see this Christmas “unless their Aunt gives them something.”
The popular holiday breakfast first started in 1987.  In the beginning, there was only one seating with about 75 children. But as time moved forward from Christmas to Christmas, the celebration became increasingly popular. This year, 400 children – at four different seatings received a pancake breakfast, a photo with Santa and a single $10 to $15 gift, said the elf, Flores, the Y’s director of operations.
“This is the one community event where I have to turn volunteers away because I have too many,” Flores explained. “It’s open to the entire community. Many parents tell me that this is the only gift their child will get.
“This grounds me and makes me realize how fortunate I am to have a job and to be thankful for my family.”
Y Interim Director Margaret Hernandez, who filled the vacancy recently, said she brought her son when he was 3-years-old.
The breakfast “has a long history at the Y,” Hernandez said. “I’m grateful to help keep this going. There’s nothing better to see then a child receive a toy and it makes them smile.”
Parents pored in holding children dressed in an array of holiday styles, some girls wearing pure white dresses while others sported reindeer antlers, mufflers and holiday T-shirts.
Herlinda Perez and Heriberto Pacheco, who brought their four children ages 2 to 10, said the Y’s generosity brings them relief. She can’t work because of how many children they have (it costs more to hire a babysitter, she explained) and Pacheco was laid off from his construction job.
“It’s just so fun for the kids,” said the mother. “They love to come here. They are happy just to see Santa Claus. It’s been hard. My husband was in construction and now he looks for metal in the streets.”
With all the clapping and sing-a-longs, it was hard to separate out who was happier – the volunteers or the guests.
Port Police Officer Byron Culbertson, his wife, Jeannette and sons, Gavin, 11, and Jordan, 8, have come the last two years. Byron flips the pancakes and the sons build an assembly line. Gavin placed two pancakes on each plate along with sausage, then passed it to Jordan to add the butter.
“It’s a tradition of serving the community and my whole family loves it,” said Byron. “It just warms the heart to see them (the children) get a meal and to see them smile.”
Added Gavin:  “I enjoy it so much. It just makes us feel good.”
Besides a gift, children were treated to crafts – and a brand new book from "Hippo in a Tutu" to "Pirates of the Caribbean" along with "Bernstein Bears" and "Baby Einstein." Students from San Pedro High and Port of Los Angeles High Charter School gave out books to scores of excited children.
“This is what I love to do,” said Bailey Duarte, 16, who serves as the vice president for Rotary Interact at the charter school. “The first thing the kids do is make a beeline for the books. That’s so fulfilling. It’s my passion. I’d rather be here volunteering then sitting at home watching T.V.”
With merriment abounding,  Edwin Ramirez, 10,  said he and his sister, Johana, 8,  and their 5-month-old baby sister, Denise, were delighted to be there.
“I liked the event,” said Ramirez holding his head proudly. “We got free food. We could color. I really liked that Santa was there.”
Posted by theunderdogforkids at 7:39 PM No comments: Links to this post