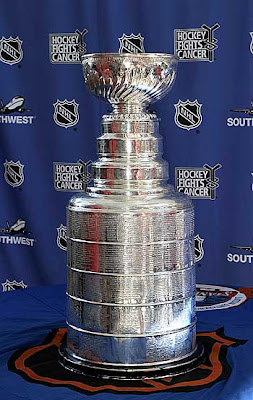 The world’s most famous sports trophy, the Stanley Cup, will be at Taco Bell Discovery Science Center on Thursday, Sept. 13, from 3 to 5 p.m.

For the price of admission, children and families can take a photo with the Stanley Cup, currently held by the 2007 National Hockey League Champions the Anaheim Ducks.

The special, two-hour event kicks off a partnership between the Science Center and the Anaheim Ducks, which will bring “super-sized” field trips and hockey-themed exhibits to the Southern California. For more information, visit the Science Center’s Web site: http://www.discoverycube.org/

Chill Facts on hockey and the Stanley Cup:
The standard puck weighs between 5 ½ and 6 ounces. Pucks are frozen before a game to make them bounce resistant.
The Stanley Cup is 110 years old, weighs 35 pounds and is just less than three feet tall.
The Anaheim Ducks are the first California team to win the Stanley Cup!
Posted by theunderdogforkids at 12:00 PM No comments: Links to this post