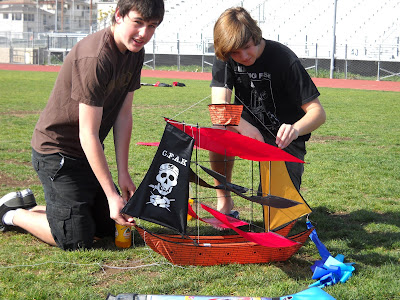 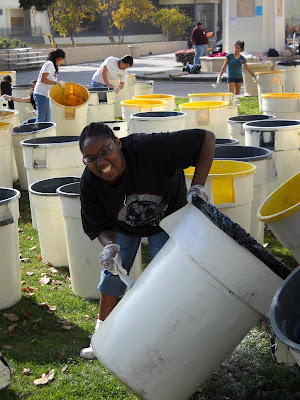 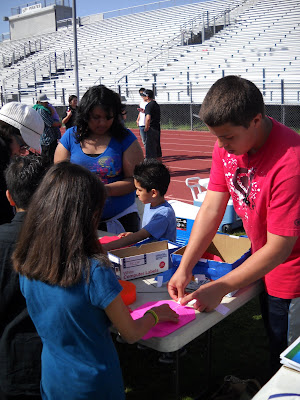 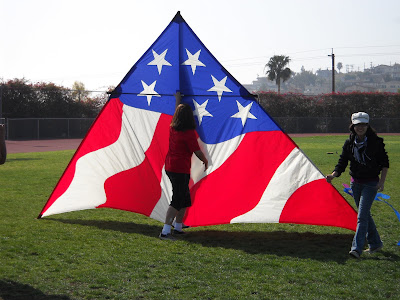 Flying kites next to impossible due to little breeze 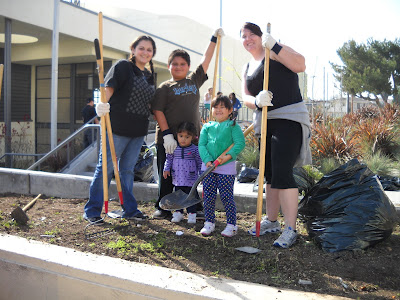 A Starbucks family joins in the clean-up effort 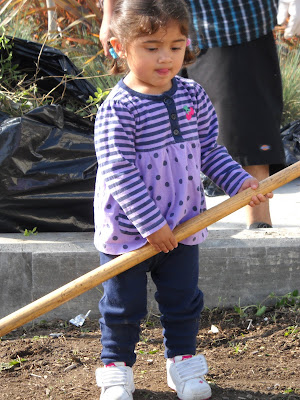 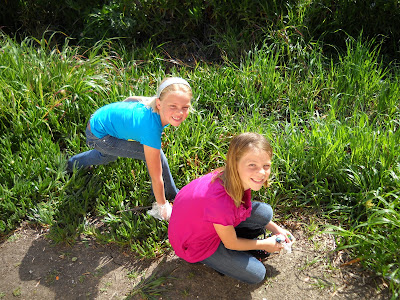 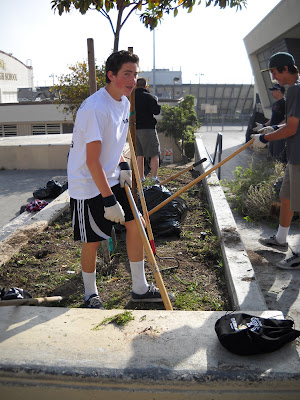 A COMMUNITY DAY OF SERVICE AT SAN PEDRO HIGH SCHOOL BRINGS OUT STUDENTS, STARBUCKS EMPLOYEES, ELEMENTARY SCHOOL KIDS AND KITES – EVEN THOUGH THE DUD WINDS FAILED TO GET THE KITES UP IN THE AIR, CHILDREN SEEMED TO ENJOY BUILDING THEM ANYWAY

With a day of warm Santa Ana winds and a bit of haze Saturday, San Pedro High students along with community members – including more than a half dozen Starbucks employees – came to weed, clean up trash and paint trash cans to beautify the school.

With a nearly 32 percent dropout rate and a campus with three-quarters of its students on some type of lunch subsidy, the beautification plan was expected to attract scores more residents after school official, Sandy Alvarenga, sent out notices to every single, local elementary school and sent out hundreds of fliers.

Despite that disappointment of low attendance or little winds , the 35 students who attended, along with the principal Jeanette Stevens, Los Angeles mayoral staff, Starbucks employees and Kiwanis Club members still seemed to enjoy the 9 a.m. to noon event.

Even with perkless winds – and few kites taking to air – several San Pedro High students not only helped little ones make kites – they tried to fly them as well.

“If only the wind would have cooperated, we would have seen more kites in the air,” the principal said. “Regardless, kids were thrilled to run around the field with their home made kites trying extremely hard to get them to stay up in the air! It was a great day for family, community engagement, and fun!”

Starbucks employee, Kelly Soto, who works at the Peninsula Center, said she was thrilled to be back at her alma mater where she graduated ninth in her 1997 class. She was saddened, she said, because of the large dropout rate and hopes to do future work with the students.

“I love it,” said Soto, as she raked up weeds and plunked them into bag. She holds a degree in marine biology. “It’s wonderful and I feel I really connected to the kids. I’ve enjoyed coming and chatting with the teachers and the kids aren’t used to having adults around them. We are happy to help out.”

“It’s so wonderful to give back to our school,” said Isaiah Gutierrez, who manages the Golden Cove Starbucks and hopes to do more community service at the campus where he too graduated. “I hear things aren’t going so well, so we want to help.”

All the students who attended worked hard weeding, repainting tired trash cans and picking up trash. Even Wyland Kelly, 14, in 9th grade, said he came “because I needed community service hours, but it’s not that bad.”

“It’s not a bad way to get community services hours,” said a seemingly happy 15-year-old Alec Lautanen after he and his friend Brandon Currey, 14, finished building a pirate kite.

Community member James Weston, along with the Kiwanis Club, provided kites and brought professional fliers to the event. But even with the poor winds, Weston said: “See all the kids playing out there and being outside even if they can’t get their kites up.

Posted by theunderdogforkids at 9:56 AM 2 comments: Links to this post