Little Pit Needed His Help and She Got It


A Random Act of Kindness Costs Man More Than He Bargained For, A Horrific, Sulfurous Smell, One Sick Puppy & $1,800 He Didn't Have

He didn't pick her. She picked him, her golden-green-yellow eyes batting at him outside a Jack-In The Box in Paramount. He calls it coincidence. His friend calls it "destiny" that he now has an unplanned, unwanted three-month old abused pit bull that needs surgeries.

None of this was in the life plan of Michael Stewart, 25, of Long Beach, a laid off AT&T manager-turned "self-employed pool guy" who struggles to make money since the recession and had dreams of owning a large, male blue pit as soon as he was financially able. All that changed when he rolled up at the restaurant to meet his friend one morning at the end of September and was greeted instead by a tiny Weimaraner colored puppy with a pink nose and a little pink tongue hanging out. 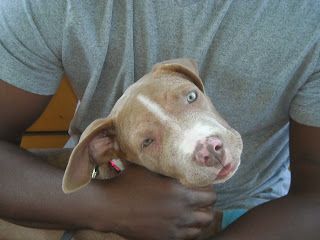 "She was looking right at me" and "I said: Aren't you cute?" Michael explained. "I asked if anybody knew about the dog, but no one did."

What he didn't know at the time: someone had hit Jaw-z, thus her name, with either a baseball bat or stick -- breaking her jaw so badly, a big piece of bone was floating inside her mouth  -- dead. She was so skinny, her ribs stuck out. But other than that, she looked fine. The injury was not visible and she was eating like a horse, so Michael didn't suspect anything was wrong other than the rank odor that floated along with her.

Thus began the odyssey (the kind I like) of Jaw-z and Michael, who had no intention of bringing the pup home. Despite that, the small dog glommed onto him, only leaving his side for a few minutes while begging for food from other customers. But the puppy returned to him repeatedly, crying, so he shot her photo and sent it to his friend, Alvin Lawrence, 24, who he was meeting. In the meantime, Michael's will power snapped. He broke down and bought Jaw-z five chicken McNuggets, which disappeared in seconds. He bought her 10 more. "She scarfed them down and she didn't even take a breath." And despite her smell -- something like a cross between rotting fish and rotting meat -- he petted her and let her lick him all over his face ignoring the repelling scent.

When Alvin met Jaw-z, he encouraged Michael to keep her. No, Michael said, he would take her home just to get her off the street and then bring her to the shelter in Seal Beach where both the Long Beach residents were working to clean pools.

But when they arrived at the shelter, the doors were shuttered. The facility was closed that Monday and the following day. Alvin shook his head and said: "That's destiny right there, man." Michael responded that he didn't believe in destiny. But to Alvin, "it was meant to be," because the signs of love were blossoming between a man and his dog before his eyes.

Michael, he said, would gently tuck Jaw-z into his truck with a buckle, coo to her to make her know she was safe, take her everywhere he went and held and kissed her despite her stench.
On the dog side of things, even when Michael left her with Alvin, Jaw-z would whimper and cry. Alvin suggested perhaps it was time for Michael to rethink his plans and forget about that big male pit he wanted to name Dump Truck, Tank or Torch.

He had, Alvin said, through fate, been teamed with this dog for life.

"I thought: shots, spaying, dog food. I can afford that," Michael said. ''That wouldn't be too bad." Since the recession, Michael has been living with his mom, Sonia Watkins, and her two dogs. He knew she wouldn't mind if he brought Jaw-z to live with them and his mom's two dogs, Mini, 11, a 15 pound rat terrier, and a laid back Kooper, a 100 pound, docile 10-year-old pit rescue from Venice whose idea of a good day is to lay on his back.

But for Michael, it would turn plenty bad when Alvin spotted some caramel-colored discharge in Jaw-z's mouth. "What's that?" Michael didn't know, but despite washing her and taking care of scrapes and cuts, she continued to smell.

Taking her to a vet, Michael learned the bad news about the broken jaw and that someone had deliberately injured the puppy "and she still loves people," he said. The bone had turned black, was dead and had cut its way out of her mouth and the carmel discharge was the infection causing the smell.

"It cut its way out enough to be sticking out," Michael explained."So it didn't fall out but just stayed there like a tooth. And that was the first thing they did was pull it out since it was completely detached and dead."

Without the surgery, one veterinarian told me, Jaw-z would die within a few weeks. Michael was flipping out when the first estimate he received was $4,000, which was "absolutely shocking."

Michael was reeling, by now knowing he could never give Jaw-z up. When he bumped into my friend, Anita Sinclair, who has rescued animals from brown pelicans to dogs over the years, she wanted to help.

"He was crying and so very upset," Anita told me. "He cared so much about the puppy. Michael is a sweet guy who did not even hesitate to help a little puppy in need. Such a lovely young man! We need more like him in this world."

Anita contacted me and helped Michael put up a funding venue. Michael zoomed around looking for a vet that would give him a break. Finally, he heard about a new veterinarian, Dr. Jacobo Balairon at  Primary Care Animal Hospital in Long Beach.

Michael and Alvin sat in the lobby, waiting to see the vet. Ironically, he was busy doing surgery on a cat with not just a broken jaw like Jaw-z, but a feline that's name was Jaws. "That's fate," Alvin reminded Michael as they sat waiting and holding the puppy.

When Dr. Balairon met Jaw-z and Michael spilled out the whole story, he agreed to do the surgery--at a cost of $1,800. If Michael could scrape up $500 that day, the vet told him, he would do the surgery and Michael could pay the remainder later. Michael took the last bit of his money, paid $500 for that operation, and is praying that others will help him pay the rest with donations or in-kind goods, such as dog food, paying for vaccinations and such. He barely has money left to pay for the gas to get to his pool jobs, he said.

The good news is that the surgery saved her life. It was improbable that Jaw-Z would have lived much longer than three weeks in her condition, the veterinarian said.  The infection would destroy her ability to eat or drink and though she had to have pain, she didn't show it. She was a "real trooper," Balairon said. "Super playful, super nice. But she had a really bad infection. She's really tough."

He partly agreed to the deal because: "Michael is just a really nice. He fell in love with the dog and he didn't know what he's getting into." Balairon said the hospital does frequently try to work with rescue groups, but cannot always do so because "we have to pay the bills for the hospital. We wish we could do it for every patient."

In the meantime, a grateful Michael is rethinking his attitude about "destiny" and changed Jawsy's original name to something more contemporary, like a rapper's name, and that's how he came up with Jaw-z.

"I don't believe in fate or destiny," Michael said. "But it just got crazy that the vet was doing the same kind of surgery for a broken jaw, and not just any broken jaw," but the same procedure he would do on Jaw-z.

Jaw-z is not completely out of the woods and may still need reconstructive surgery.
But in less than three weeks under Michael's care, she has picked up the pounds and become more muscular, going from 18 pounds to nearly 29. That's the Jaw-z I got to meet, her little pink  tongue still hanging out.

In her short life, it seemed Jaw-z made one important decision wisely: who she picked to save her.

Want to help? Donations for Jaw-z can be made at http://www.youcaring.com/pet-expenses/jawsy-the-puppy-need-help-with