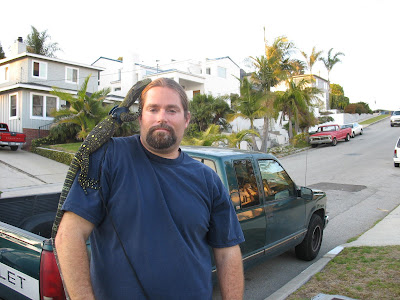 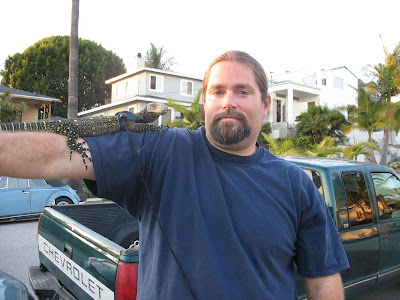 Having a cool neighbor with a load of reptiles and other bizarre critters is intriguing.
Having that neighbor, David Brummel, living right next door is even better; he can entertain us for hours just a skip and skitter away.
The latest entertainment for the kids: Jah, a four foot long, one-year-old crocodile monitor lizard who can grow up to ten feet long!
As cute as this guy (the lizard I mean) can be, David doesn’t recommend children get these dudes for pets because of their long claws, sharp teeth and their aggressiveness! Plus, they get large…really large. About 2/3 of their length is tail.
"I've wanted one of these for more than half my life," my neighbor told me, "but it takes such a big commitment and its such a big responsibility, it was a big decision to get one."
(Don’t forget that, David. He better not escape. We live right next door.)
Since he was a child, David has collected and cared for an abundance of critters, especially reptiles. Not counting his two black Labradors, he also has ten other reptiles, including a sail fin dragon, green basilisks and day geckos. He even owns a tarantula.
How does that grab you? Hopefully, the monitor lizard doesn’t. Actually, they are relatively safe as long as you get them as youngsters, keep their claws clipped and tame them.
“The key is to get them when they are babies so you can train them,” David explained as Jah scrambled across his head and then dropped down to the ground where he roamed about on his leather leash. “I only recommend that advanced hobbyists get these. If you don’t know what you are doing, they can be dangerous.
“They have long teeth (sharp) enough to cause nerve damage.”
The largest such monitor to exist is owned privately and is 11 feet one inches long, David told me. But the top weight he's ever heard of is 60 pounds. On that leap, I say: OK, neighbor, keep that sucker indoors – will ya!
Posted by theunderdogforkids at 8:40 PM No comments: Links to this post 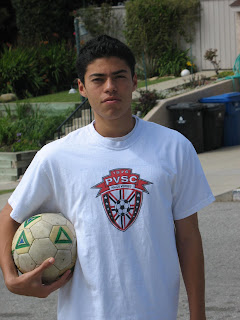 Christopher Widdy, San Pedro High School senior and captain of the soccer team, has earned a full athletic scholarship to California State University, Bakersfield – a school that will compete in the NCAA’s Division 1 this year with the nation’s best teams.
Few college soccer coaches scout high schools for players; they tend to look at private clubs instead. However, San Pedro High Coach Paul Butterfield worked diligently to get college coaches to scout his players, Chris in particular.
CSUB Coach Simon Tobin said he spotted a couple of other players in San Pedro where raw talent abounds, but few soccer coaches visit for scouting. Most scouts go to private clubs; Simon also listens to his own players’ recommendations about potential teammates. That means Chris, who also captains the Palos Verdes Soccer Club where he has played since the age of 9, has opened doors in San Pedro.
Chris has worked hard to bring up his test scores and grades—a tough road. But nothing reflects his happiness more than his feelings about playing soccer.
“Everything seems to work when I’m on the field,” Chris explained. “It just seems that everything fits perfectly. There’s no stress.”
He believes his biggest attributes are his ability to anticipate plays and the way he attacks the goal. He readily admits his weakness has been playing too much as an individual and not enough as a team member– a style that probably will change quickly under Coach Tobin, who has coached at CSUB for 20 years.
A native of England, Simon looks for players all over Europe, Mexico and South America. He says Chris still has much to learn about soccer, but he’s strong and should be ready to play immediately as a forward or midfielder.
Having known the Widdys for years, I was lucky to meet Simon, who said he looks for speed and agility in his recruits. He prefers the quicker Latin style of play.
He wasn’t interested in coming to San Pedro to scout high school players, but San Pedro Coach Butterfield called him repeatedly. When he was in the area, Simon decided to drop by and watch a game. He was impressed with several; players but especially Chris.
Chris believed his chances for a soccer scholarship had slipped away because “we were deep into the year and I just thought it was over.”
His plans were to attend a community college, but through Butterfield’s relentless efforts, he received the offer from CSUB. “I am grateful because he (Butterfield) believed in me,” Chris said. “I didn’t think I was capable of playing at a Division 1 level, but he did.”
Receiving a scholarship has been his dream, as well as his entire family’s. He’s determined to earn a degree in business. Coach Tobin explained he typically discourages his players from going into the professional soccer ranks until they earn their degrees, because an injury can rule them out of the sport. A degree, however, can never be taken away.
I personally am quite pleased, because Chris has assured me that he will come back to help coach other children in San Pedro.
Other former San Pedro players “always came back to train with us and they really helped us out,” he said.
Posted by theunderdogforkids at 7:53 PM No comments: Links to this post