LOS ANGELES COUNCILWOMAN JANICE HAHN ONCE SAID LET THERE BE GOATS, BUT THERE ARE STILL NO GOATS AND A SURVEY OF HARBOR AREA RESIDENTS PARK LAND NEEDS JUST DON'T FIT THE BILL

By Diana L. Chapman
My old buddy, Ray Patricio, called me piping hot mad just the other day. And I can’t blame him. It was just one of the many peculiar things the city of Los Angeles Recreation and Parks does to upset and discourage people.

This time Ray’s anger stemmed from the ludicrous survey the department sent to the Harbor area residents residents asking what they wanted in their parks…probably a first in the history of mankind, I might add.

Because the truth is – they don’t really care what the residents want.

The results, released this week, turned out to be nothing that the community of San Pedro has been screaming for, but rather a water-down, diluted version of requests for walking, biking and nature trails, small neighborhood parks and pools – outdoor or indoor.

Here is my question to Recreation and Parks: If they do care, might they have not noticed the Harbor Area has at least four separate communities, Harbor City, Harbor Gateway, Wilmington and San Pedro – all of which have different needs, desires and identities.

Using the one-size-fits all plan was what Los Angeles Mayor Antonio Villaraigosa marched around accusing the Los Angeles Unified School District of doing. He must not have looked in his own backyard, because this is something Los Angeles does everyday – and in particular, Recreation and Parks.

Years back, city officials produced what were called park community advisory boards, designed to ease the uneasy feelings that residents didn’t have much to say about their park lands. The boards cropped up across the city with residents excitedly thinking they could make great changes.

Instead, what I’ve gleaned from serving on a park advisory board – and talking to members of many others – is that the department really doesn’t take the boards too seriously. Here are the three schools of thought from park advisers I have heard repeatedly.

--It’s so difficult to get anything done, even as small getting a park bench, that it turns into a frustrating odyssey and after years of quibbling – perhaps officials produce a bench.

--The constant joke among volunteers is: They wait you out, so finally you give up or leave or in some cases, die.

--To get anything done, you almost have to turn your whole life into that one cause and become a Joan of Arc – or else it will never happen.

While I thought we paid recreation and parks to be visionaries, it turns out they can’t get of their own boxes and the residents have to step up to show the city what it needs. It took long, not such pretty battles to get the dog park and to have the pool at Peck refurbished and turned into a year-round facility.

To get what they needed, the kids had to take matters in their own hands and build a bootleg skateboard park down in a vacant lot below the 110 Freeway. That happened despite that Peck advisers would have voted for such a facility in a heartbeat.

In the meantime, tiny towns like Napa – and even Ensenada in Baja – assembled skate board parks to address the crews of kids that were once riding the streets, using parking lots and school campuses.

When an idea crops up – no matter how remarkable – it seems we pay the staff to form a battle plan and use the words “no” as often as possible.

What also happens is that many of us discovered the hard way that even our councilwoman – who endorsed Ray’s goats-- wields little power when dealing with the bureaucratic, inbred bunch. With two term limits, it was easy to wait the council office out as well.

This might change with the new measure that will allow council members to run for a third, four-year term.

It makes me sad that for years, Ray has lobbied, screamed, yelped called everyone he knew on this planet to ask the city to allow for a small animal ranch at the park to symbolize the old and historic Hernandez ranch that was there for decades.

As a compromise, he finally settled on just bringing in goats to graze the canyon, clean it up and keep it from becoming a fire hazard. This is his swan song to make this canyon, a thriving come-to-life-park, where families could walk the trails and kids could see the animals -- rather than a bunch of dead trails and scrub.

Finally, the city agreed to let in the goats in for a short period of time. I guess it must have been too successful, because the residents flocked from all over, dragging their kids, just to watch something we’ve lost long ago – animals grazing.

It showed that Ray was right – a huge need exists to educate kids how animals operate – and it makes so much sense.

The trouble is: it just makes too much sense for Recreation and Parks.
Posted by theunderdogforkids at 2:24 PM No comments: Links to this post 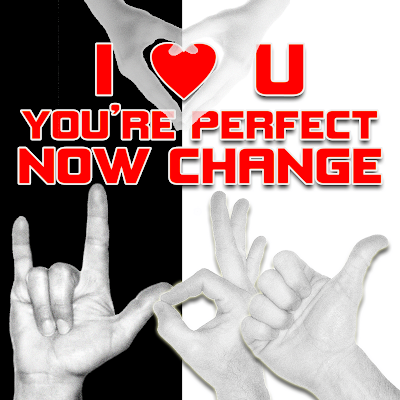 THE RELEVANT STAGE PRESENTS THE SMASH OFF-BROADWAY HIT:
I LOVE YOU, YOU'RE PERFECT, NOW CHANGE TO PLAY AT THE WARNER GRAND THIS FEBRUARY:
--Submitted by the Relevant Stage
You've seen the musicals about felines, cross-dressing nuns, teapots and candlesticks, old French flags, helicopters, flying pigs, singing murderesses, falling chandeliers, and lousy navigation through an ice field.
Now, at long last, "I Love You, You're Perfect, Now Change" exposes everything you've secretly thought about dating, mating, and romance but were afraid to admit. The Relevant Stage's upcoming production of this hit musical will take you on a joyride through the jungle of the modern-day suburban mating game. Run dates are Feb. 13 to Feb. 22.
A free Champagne Intermission is offered to love birds who attend our special Valentine's Night performance on February 14 at 8PM.
Please be aware this is rated PG-13 due to some adult content
Warner Grand Theatre 600 W. 6th St., San Pedro, CA 90731
WGT is a facility of the City of Los Angeles Department of Cultural Affairs
Regular Ticket prices are: $5-$20
Show times are: 8:00 PM Fridays & Saturdays; 2:30 PM on Sundays
Call (310) 929-8129 for information.
The Relevant Stage Theatre Company at San Pedro's Warner Grand Theatre visit: http://www.therelevantstage.com/T: 310/929.8129Office: 600 S. Pacific Avenue, #220 San Pedro, CA 90731Venue: 478 W. 6th Street San Pedro, CA 90731
Also in 2009:*THE HOUSE ON MANGO STREET*UPTON SINCLAIR'S SINGING JAILBIRDS*HIGH SCHOOL MUSICAL 2*ASSASSINS*RICHARD O' BRIEN'S ROCKY HORROR SHOW*THE CHRISTMAS CAROL*Subject to change
Posted by theunderdogforkids at 11:13 AM No comments: Links to this post