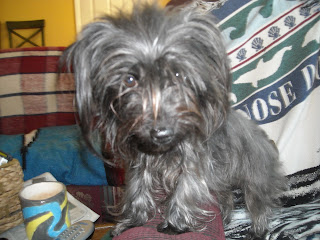 Driving to Wilmington recently on a cold morning, I got off the Anaheim Avenue exit from the 110 Freeway and my eyes immediately fell on a tiny terrier, smaller than some cats, trotting along the street.
The munchkin couldn't of weighed more than ten pounds and kept looking back at a man walking another dog on its leash.
I had two minutes to get to Gulf Street Elementary for a writer's workshop so I concluded (to make myself feel better) that the little beast belonged to the man. After all, she kept looking back at him -- lovingly.
I dismissed it from my brain's archives. But life plays tricks on us in mysterious ways and nothing is ever what it seems. As soon as I abandoned any thoughts of rescuing the little gal some shifting in the universe must have taken place.
After a great workshop, I walked out the school doors and was astounded to find her sitting there. She would have crossed Wilmington Boulevard, an artery often clogged with semi-trucks and piles of traffic around the hustling Los Angeles port. She too must have wandered through other busy residential areas hemmed in with apartments and homes.
I was surprised she had made it here to this school in one piece at all and was also bemused by the coincidence.
"Oh, sweetie, what are you doing here?" I said. She immediately wiggled over, this wiry haired looking terrier, rolled on her back and waited for me to pet her tummy.    That wasn't something I couldn't resist.
The moment I saw her at the school, I decided she was coming home with me for safety reasons alone while knowing my family of two dogs, one son, and one husband were going to be furious.
But I had no choice. To  leave a small dog that was basically acting like a baby and trusting everyone and anybody wouldn't live long on the streets -- just from sheer volumes of traffic alone. As we left, I watched her whimper out the window looking for something or someone. She cried and cried.
Before I could mix her with my dogs, I raced her to the vet who -- and I agreed -- assessed that she was well cared for. She had no fleas, seemed well groomed as much a wiry haired dog can be -- and was so loving and affectionate that it seemed virtually impossible that she hadn't had a loving owner. She also had a microchip, but it had not been registered. Dead end there.
While many stray dogs roam Wilmington streets, this wasn't  the norm. The vet gave her a clean bill of health and I headed home to my two-pack dogs who always act silly when anyone arrives barking and leaping up like a frenzied lightning storm. They were doing their usual craziness as I walked in, but then realized something was in my arms.
They stopped. Looked. And then began to gruffly bark and surround us with even more over-the-top enthusiasm.
She was terrorized. To her, my dogs, while not that big, must have seemed like giants. Boo and Baxter, while a bit peeved, seemed to realize we had a guest for awhile and let her settle in.
The next round was with my human family, my husband and son, both of whom already told me on the phone they were angry that I thrust another animal in our lives of an already crowded house. That was before they met her. Their sentiments were about to change.
The first test was Ryan, the 19-year-old son. He walked in the door, took one look, at the quivering canine, scooped her up and instantly adored her.
Later, when my husband walked in, I braced for more anger. Instead, the little one raced to the door to greet him with a wagging tail.  Once he spotted her, I could see his face melt with kindness. He agreed she couldn't have stayed on the mean streets of sprawling Los Angeles. Last April, police found two beheaded dogs, a chocolate Labrador and German Shepherd, in a trash can in South Los Angeles, a disturbing and gruesome cruelty one top official called "despicable."
I was so outraged over that act and did a story to alert readers. A $20,000 reward was offered to snatch the culprits.  How could I possibly leave this loving baby to wander into who knows what?
Now -- currently serving as her foster family, we have given our little one, who likes to sit quietly in my lap for as long as possible, the following names: Lulu, Adele, Little Girl, Pumpkin Baby Girl and No Name.  We will be on a search for those who loved her and possibly lost her. A teacher from the elementary school has promised to look at lost dog signs. I will too.
Because it's not possible that in our crazy world which so often treats animals as disposable garbage that someone didn't love this mysterious little girl.
Please share this post.
I can be reached at hartchap@cox.net.
Posted by theunderdogforkids at 10:53 AM 1 comment: Links to this post