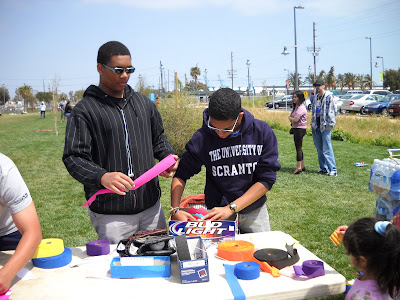 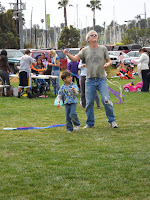 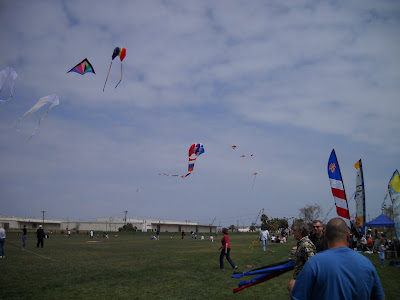 Chris Davies and his 5-year-old Alex fly kites together 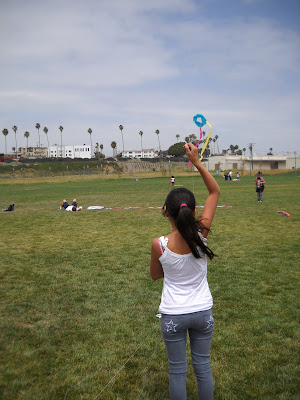 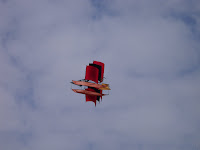 Heidi Hernandez, 11, flies her kite alongside a ship kite 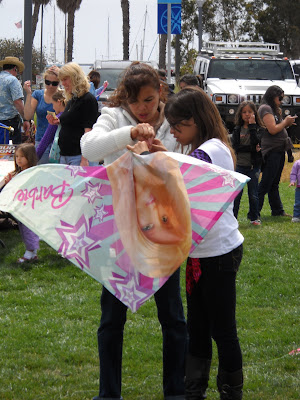 Two people struggle to put their toy together 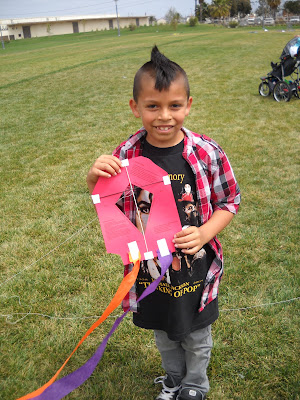 Martin Garcia, 7, changes his attitude overnight
after a professional kite flier gave him a kite


A KITE FLY AWAY: RESIDENTS FROM INGLEWOOD TO LAWNDALE COME TO SAN PEDRO TO FLY KITES; AND ONE GRANDMOTHER OUTLINES THE MIRACLE THAT THE KIWANIS’ KITE FLYING ACCOMPLISHED FOR HER 7-YEAR-OLD GRANDSON

A colorful variety of kites took to the skies in San Pedro last Saturday, bringing residents from all over the South Bay for fresh outdoor family fun.

With tricky winds, most kites weren’t up until the afternoon as scores of kids kept pouring in lining up at a table to make the historical toys.

Thomas Davies, 7, who dragged his Transformers kite to the event, had his toy up early, plucking at the string like a guitar and moving with the fickle wind. Somehow, despite it being his first time flying, he was able to keep his toy flying longer than many adults.

“Well, when I first started, it was hard to get it up,” Thomas explained proudly, his dimples glowing. “And now it’s been up awhile.”

Janice and Chris Davies of Lawndale, Thomas’s parents who brought along their 5-year-old Alex , said they spotted the event in the newspaper and were happy they attended.

“Alex is five and he doesn’t want to let out the string,” Janice laughed, “which is a problem. I think this is great. It gets the families out in the fresh air. It’s a classic form of entertainment. There’s no videos. No T.V.”

No one was happier that day than San Pedro resident Karen Allen who said she tried everything to make her grandson, Martin Garcia, 7, who attends 15th Street Elementary School, feel included and happy.

Martin was depressed, had difficulties connecting with people and struggled to do his homework.

Then a small miracle happened. Martin with his sister, Isis Allen, 5, and “Auntie Heidi “Hernandez, 11, went to a San Pedro High’s clean up event on March 20, in which kite fliers connected to the Kiwanis’s club attended.

He slept with the kite each night, did his homework, his grades went from 2s to 3s and 4s, he quit fighting with his sister and the day of annual event – he called his grandma up at 6 a.m. and said he was ready. The event didn’t start for four more hours.

“He was just having such a hard time with self esteem,” the grandmother said. “Lately, he’s been so happy and the kite has meant so much to him. He now feels he’s part of a group of people. I had tried everything. Who knew it would be a kite?”

Martin, his aunt, and sister ran around with their kites, struggling to get them up in the air. Thomas didn’t care. He was screaming with thrills his kite, tripping behind him – and sometimes ahead of him.

“This teaches you how to fly a kite and I liked the running around and how it flies,” Thomas said excitedly. “It’s interesting how it works and it has good colors.”

“My husband Don and I took our three year old grandson Connor to the event knowing that he would either love learning how to try and fly his first kite, or have a great time watching others fly theirs. Luckily, he was able to do both. The Kiwanis had starter kites and plenty of patience in helping children put them together. Connor got the kite up three times and stared with amazement each time. He was then content to sit on the grass and watch others fly their kites.

It was a wonderful day.”

So much so that Kiwanis Club President Tim McDannold, added: “There’s no doubt we’ll do this once again. I’d like to do it more than once a year. We’ve got to give kids more choices in life whether they join a gang or go fly a kite.”

The annual kite fly was the brainchild of James Weston, whose family has had longtime ties to kites. First his brother, then his mother, Monty, owned Up Up & Away, a popular kite store in Seal Beach.

James met his wife, Monica, through his mother’s kite flying friends. When his mother died, his sister-in-law took over the store. It’s a cinch their daughter, Mae, 1, will learn to fly them.

Weston said he was pleased with the event – as he spent much time on the grass helping children get their kites up in the air.

He’s not sure what he’ll do next to bring the community together – his mission to make San Pedro a happier place. Perhaps, he said, a chili-cook-off is in order.

In the meantime, Martin was still running about screaming in delight as his grandmother looked happily on and said: “I will volunteer for them anytime.”

Posted by theunderdogforkids at 5:38 PM No comments: Links to this post