I loved this story. It surprised me that a 10-year-old could figure out the trend that more and more people are becoming prejudice to those overweight. Helena capsulizes this well in her story. It's a building problem where one airline says it's considering charging people by their weight; An obese boy was taken away from his mother solely because of his weight (he lost nothing while in foster care); and it mushroomed into a hospital saying they would not take care of obese people. I was proud
of Helena for writing this story and still scratching my head as to how such a young girl figured this out.
And just so you know, neither of her parents are fat.

My Super Fatso Dad
By Helena Ghekiere, 10
My name is Marsha Jane Brady.  I have a super skinny mom, her name is Breggita, a regular sized twin sister, Mia, and a super, duper, super, duper, fat, fat, FAT dad, named Bob. One day, I was doing my homework when my dad trudged into the room.
"Marsha, can you hand me that donut?" he asked as he stood in the middle of the homework room.
"Dad is it just me, or are you fatter today?" I asked. But he didn't seem to hear me which is good because if he did hear me, I'd be in HUGE trouble.
"Marsha, would you PLEASE hand me the donut?" he asked again, a little angrier this time. I didn't answer because, well, number one, he could do it himself and two, he didn't need the donut.
"Give me that donut!!!" Dad commanded almost growling.
That's when I totally lost it and yelled: "Dad, you don't need a donut!!!" If you ask me!" But I just screamed that in my head so no one else would hear it.
But I did say out loud: "Hey, Dad, why don't you go to the kitchen and get a donut, O.K.? Why don't you do that, fatso? I mean Dad."
Then Dad started trembling in rage. "What did you call me?!"
I said, "Um, Dadso!" I said it with a fake smile plastered across my face.
"You called me Fatso," my Dad yelled. "You are grounded for, how old are you now?" he said in a softer voice this time, which sounded more scary then when he yelled.
"Ten," I confessed.
"You are grounded for ten weeks!" Fatso said.
"Dadaaaad," I whined. "O.K. umm, two weeks?"
"And that is final!" he grabbed my arm and dragged me into my room. He scowled at me before closing my door. Luckily, I don't have a lock. Then, I heard a clicking noise. I went over to the door to see if it was open. It wasn't.
That night, I was lying in my bed when I heard some tapping on the window. At first, I thought I was imagining it. Then it kept getting louder, louder and louder. Then I heard a faint yelling. I listened carefully trying to make out what it said.
"Open the window. Open the window!" I heard.
I rushed over to the creaking window and yanked it open.
"Mia what are you doing here?!" I asked astonished.
"I'm here to rescue you, duh," my twin said.
"How will you get me out?" Did I mention that there was a screen super-glued to my window?
"Easy," Mia said. She reached into her pocket and pulled out a knife.
"Where did you get that?" I asked stunned.
"I stole it from Dad's prized, kitchen collection," she giggled as though she outsmarted our super fat dad.
"Shh....or Dad will hear you! I got it when Dad was dragging you to your room," she explained.
"Let's get you outta here," said Mia suddenly.
"Right!" I said. I had almost forgotten why she was here. She started cutting the screen and soon the old screeny lived no more.
"Come on Marsha," Mia said. "Climb out."
O.K. Some information. When windows are a foot higher than you, and you are not flexible, it's hard to get out of a window. My window is a foot taller than me and I am not flexible, so it was not surprisingly hard to get out.
"I can't," I yelped. "It's too steep. Can you help me?"
"Sure," Mia said, starting to pull me up by the hand.
Finally, after two hard minutes, I was free.
"Now  what should we do?" asked Mia.
"I don't know. I thought you were a genius," I answered.
"I can't always think up a solution," she said.
"I thought you already had a plan!" I yelled at her. I was getting mad now. Really mad.
"Well, sometimes you shouldn't expect something when you don't know it's true," Mia yelled back.
I got so mad I wanted to burst. I stormed off. You have to remember that we were on the roof. So without assistance of Mia I was helpless. Whoa. What was that? I started slipping on a broken roof tile and then, I fell, down, down, down.
And suddenly, it stopped. I felt like I was hovering. But it couldn't be. I didn't feel a thud either. I looked down. Oh, my gosh. It was Dad!!! Fatso Dad!!! It couldn't be, but it was.
"Dad, you have wings. You can fly?"
"Yes, I have wings and I can fly. All angels do. I love you, Marsha. Now let's get inside. It's freezing out here!"
At that moment, I decided, I would never call my dad "Fatso," again. After all, he was an angel!

Posted by theunderdogforkids at 8:05 PM No comments: Links to this post 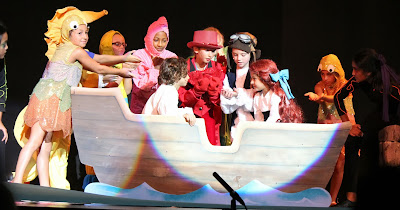 For more about Encore Entertainers, call (310) 896-6459 or email: info@encoreentertainers.org.  Visit http://www.encoreentertainers.com to buy tickets for upcoming musicals and for class prices.
Posted by theunderdogforkids at 10:54 AM No comments: Links to this post