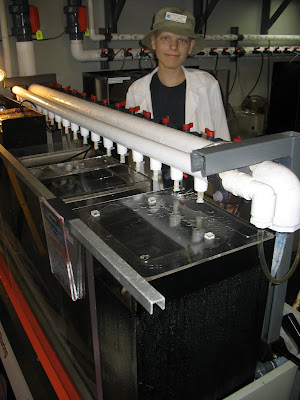 YOUNG RESEARCHER ESTABLISHES THE ROAD FOR OTHER KIDS;
An 11-year-old at the time, San Pedro student sets the pace for new and younger researchers to come aboard at Cabrillo Aquarium's Aquatic Nursery

As the first and youngest researcher in the Aquatic Nursery, Christian Stehlik began to panic when he came back daily to check on his baby, purple-striped jelly fish.

The research the 11-year-old boy outlined was to determine what baby jelly fish ate and thrived on. Instead – even though they were only about the size of a pin head – he found through his observations that when he counted his babies, they were vanishing one by one – and sometimes by the dozens.

“I just freaked out,” said Christian of his early beginnings as the youngest researcher at the Cabrillo Aquarium’s Aquatic Nursery. “I thought maybe I was counting them wrong, feeding them wrong.”

Concerned that the research using – moon jellies, brine and rotifer (a small plankton organism) – might be causing the destruction of the jelly fish, Christian immediately contacted the staff with his concerns. The staff was so impressed – and listened to what he had to say – that they focused on the “why” and discovered the aeration pumps were too strong and the currents were actually destroying the babies.

While the aquarium has always had ongoing research with older teenagers, it wasn’t until the new director, Kirsten Darrow, of the recently opened Aquatic Nursery, embraced younger children as potential researchers. Children who volunteered from 11 up, learned the laboratory rules and showed a sense of understanding and maturity when it came to the animals in the nursery, became potential candidates for the job. All work included rules that the babies must be cared for well – and that there was no stress to the critters, the director said. No dissections or stress related experiments were accepted, she explained.

On top of that, in order to qualify, young researchers had to write up a proposal which included the hypothesis, the time line, the methods and the materials that were necessary to undergo any experiments.

“This room is really intended for young growing baby animals and young scientist,” Kirsten explained to me as she carried her own baby, Forest, around with her in a pack throughout the nursery where all types of marine babies can be discovered from jelly fish to star fish. “That was what this room was made for.”

And Christian was the first to navigate the system, first with his study into purple striped jelly fish, and second into his study of “flat fish” – where he proposed the aquarium explore whether flat-fish, such as the horny-head turbot, California Halibut and English Soul – could cope with anything other than their natural environment when it came to their camouflage systems.

He outlined a study that would put the fish in tanks with brilliant pink sands in the bottom, or black pebbles – and contrast that with how they behaved compared to a tank filled with natural, colored sands from the beach. The fish often act like chameleons, changing colors so they can match their environment and protect themselves.

Christian said not only did the fish react poorly toward the variety of colors in their tanks, it appeared that some of them became outright hostile toward the unknown entities – striking out at the pink and the black bottoms or what biologists call “sub straights,” –the materials that make up the bottom of the tank.

“Whenever I tried to put them in the hot pink, I guess they saw it was white and they would change to a grayish color,” Christian said. “They just couldn’t adapt. They didn’t do to well with the black pebbles. They’d try to squirm in, but they couldn’t really use it to protect themselves.”

Since Christian paved the way for many other young researchers – having to take a hiatus once he was diagnosed with a rare illness, neuroblastoma, a cancer that typically starts in the stomach and often attaches itself to the spinal cord – a cadre of about 20 young researchers have joined the exploratory ranks of the nursery, the director said.

About three have had the exceptional abilities to be "natural observers" and shown the keen enough interest and dedication to perhaps make it in the future as marine biologist. Christian was one of those and opened the doors for others with his research.

"I've been interested in the ocean since I was five," Christian explained to me as he donned once again his white laboratory coat and began to explore the tanks with his sister, Rhea, 11. The research "just built up my confidence."

He believes more youngsters should be involved in the exploration of experimentation, "because it just makes people more responsible," for the fish, for wildlife in general and an understanding how precious life is.

“One of the things we noticed about Christian was his observation skills,” said Andres Carillo, a laboratory assistant for the nursery. “He’s a natural observer and his thought process is much more scientific. It was just easier for him to link what was going on in all his projects.

“Before, we were always hesitant to take young researchers. We looked for kids 16-years or older. He’s just a natural.”

All this is good news for Christian, who has been going under long bouts of chemotherapy, living in and out of hospitals and doctors telling him he can’t go to the movies, be in large crowds of any type or be indoors with scores of other people. At his junior high graduation, he had to sit in a room virtually alone and watch the ceremonies via television.

So it was a breath of fresh air that the doctors allowed him to go visit his aquarium family where not only does he feel right at home, but the air circulation is of such good quality he can actually visit. He’s too tired to do research at this stage, but it thrills him, his father, Pete, his sister, and the rest of his family that he is able to return to the lab where he spent hours examining tiny critters.

When he returned, he comfortably slipped on his white lab coat just like the old days and got back to work doing what he’s so natural at – observing and paving the way for future scientists.
Posted by theunderdogforkids at 10:11 PM No comments: Links to this post

Dear Everyone in San Pedro,
My son Jon, 13, has asked me to ask you to vote online so his favorite dog, "AARP" will win this contest. AARP lives about 7 doors away from us and is one of Jon's new best friends. The contest deadline is August 18. You can vote once a day from the same computer.
1. Go to http://www.petco.com/
2. Click on Petco Stars The Search for America's Most Talented Pet, Learn More>
3. Vote for: "AARP" He is the first one listed (in the top hat and black tie).
You'll be asked for your first and last name and e-mail address for your vote to be registered. If you have the time and inclination, you can even watch AARP's talents there or at http://www.youtube.com/watch?v=9ATAYJPzDgY
Vote early; vote often.
Many thanks, Kathy Popoff
Posted by theunderdogforkids at 6:43 PM No comments: Links to this post