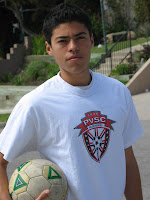 Ben Graham, new coach at Marymount, and Chris Widdy, who came out of San Pedro

Marymount College in Rancho Palos Verdes Hires Its First Soccer Coach and to Expand on Its Small Sports Program; The University of Bakersfield Assistant Coach Arrives in July and Reveals He Will Look at Players From Around the South Bay and Elsewhere

Also, TheUnderdogBlog Will Soon Go Under Reconstruction, Be Overhauled and Called: theunderdogforkids.com. For Now, the Stories Will Remain Here; Stay Tuned;

Plus a San Pedro Festival This Weekend

Marymount Coach to Start This July, Kicking off the First Soccer Program at the Two-Year College in Years

A highly qualified soccer coach from England will soon land the ball at Marymount College – kicking off the first year the small campus has ever run a soccer program.

Under the agreement, Ben Graham – currently the assistant soccer coach at the University of Bakersfield – explained he was looking forward to recruiting for the college and believes there’s vast talent in San Pedro and on the Palos Verdes Peninsula. He begins July 1.

Asked where he would find players, he remarked via email: “You can always find good players! Especially in California where the talent pool is so deep. I will be looking for players that are maybe looking to play at a Division 1 or a Division 2 school in the future, but do not have the grades to go straight there.

“I will probably also look to bring in some foreign recruits as well.”

Due to repeated calls from the San Pedro coach, Widdy was finally offered the chance to place First Division – and also received a full scholarship to Bakersfield.

Graham suspects a lot more players like Widdy, who typically plays forward for his team, reside in the Harbor Area, one of the many areas he hopes to recruit from. However, Marymount college has yet to qualify for any playing divisions, perhaps making it more difficult to lure potentially skilled soccer players.

Currently, the small college has a La Crosse program that it intends to keep, said Kelly Curtis, a spokeswoman at the school, and down the road an athletic facility.

Leaving Bakersfield, Graham said, has been a tough challenge as he’s participated in a huge investment in many of the students there to train them to play in First Division soccer.

“It is always hard to leave your existing players considering the investment you put in them, both emotionally and from a soccer perspective. But, after two years here, and four years as an assistant in total, I feel this opportunity to run my own program was too good to turn down.”

Campus officials hope that offering sports will attract more students, but also round out their academic education.

I don’t know about you, but I’m tired of the gigantic letters, bizarre rainbow colors and the strange spacing that’s going on with my blog. This led me to take a good suggestion from Joshua Steker At San Pedro Today and buy the domain – and register the underdogforkids name.

And so I have.

After a period of reconstruction, you’ll be able to find my stories on theunderdogforkids.com, which makes much more sense! For now, they will continue on this site.

The blog has been running for four years and it’s gaining about 200 hundred readers a week. That’s awesome!

While I enjoy putting community service items on, if I miss some I apologize. I’m the only blogger on this post and it’s going to happen. I especially try to give top- dog billing to those community briefs that are related to kids.

Again, I want to emphasize that my blog is open to other writers so if you have something you want to put on, just contact me at hartchap@cox.net. Thanks so much and look forward to getting theunderdogforkids.com going.

Posted by theunderdogforkids at 7:11 PM 2 comments: Links to this post