Los Angeles Artist Takes to the Skies Internationally and Locally

Financially, Nichole Blackburn was doing well. Her small business as a professional muralist and decorative painter was thriving. Money was streaming in. She enjoyed her work and the clients who hired her. She was, in fact, booked solid a year in advance.

But despite all the success and all the money, Nichole, who lives in Redondo Beach, found herself unhappy and deeply puzzled by what she was missing.

"The money wasn't buying me happiness," Nichole said during an interview at Gulf Avenue Elementary School in Wilmington where she had successfully pulled off two massive and vibrant murals teeming with wildlife, half of which were donated. "I had all those (paid) jobs and I wasn't feeling fulfilled. I felt empty." 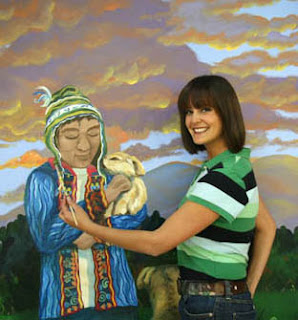 Then the epiphany struck in 2005 when a group asked her Celadon Studio, which she still owns and operates today, to donate a mural to the Center for Troubled Youth in Long Beach -- a project she dove into head first asking the kids and staff to work with her to design the painting for a 15 foot wall in its "Therapy Room." Nichole discovered then she was swimming in waves of happiness and not long after launched a non-profit, Big Sky Countries. Not a believer necessarily in small ideas, the artist drummed up a plan that everyone understands: the "skies," she said. With each visit, she would link those skies around the world through her murals bringing the last sky she witnessed to the next country, state or town.

Each gigantic donation internationally included supplies and paint. And the orphanages and schools she approached eagerly snapped up on her offer.

Between 2007-2008, four pieces went up from Ireland to Thailand infecting each art work with a whirl of near mystical hues draped in a volatile color collection often making her pieces seem alive.

All that was needed as she traveled around the world to do her donated works was giant walls and children to help her design them. American travelers she knew suggested the locations.

In Phuket, Thailand, a school devastated by the 2004 Tsunami that carried away 40,000 people across Asia to their deaths, became a brighter and happier place the minute the artist stepped on the campus. With the children, a mega painting of colors splashed up on the wall with festive scenes of their lifestyles.

From there, she painted massive murals at Cranford Elementary School, an  inner city campus in Dublin; a Philippine orphanage where she found kids who were either abandoned, physically abused or child labor victims; and in Sucre, Bolivia at the Institute Psychopediagocico, where children were either orphaned or handicapped.

At each organization, she connected the world with patches of clouds, one sky at a time. Dublin received a scene from Thailand's heavens, the orphanage in the Philippines received Dublin's golden blue clouds, Bolivia received a peachy Philippine's sky and when she returned home she was driven by the Hurricane Katrina disaster and wound up painting murals at Gauthier Elementary (earlier devastated by Hurricane  Katrina and being rebuilt) and the O.T.T.P Youth Center for Inner City Teens in Long Beach.

Children and staff are always included in coming up with designs, awash in a brilliant array of hues including a palette of thousands of colors. The children and staff draw out their ideas and Nichole brings their visions together in one mural. All an organization needs are big walls. Donations sent into her Big Sky Foundation help pay
for the art.

"My happiness came from painting and donating my work," she said, while she continues to run her private studio. She now offers local schools and other organizations a way to purchase a mural and get a second one donated.

David Kooper, principal of Gulf Avenue Elementary, said he was thrilled to bring such an accomplished artist to his campus not just because of her exemplary work but because of her affinity with children.

"Through her art, we have recreated our school," the principal said. "She has created a wonderful atmosphere here at Gulf that our school community really loves. I love hearing parents, staff, and children telling me about their favorite mural. I love that they tell me: 'Nichole painted that animal for me.' or 'This one is my favorite mural.

"My favorite one will be the next one she does because every time she does one she outdoes herself."

It's true that the campus practically glows as two striking killer whales leap through indigo colored oceans surrounded by other aquatic creatures. On another wall, Gulf students convinced Nichole to paint a jungle land filled with exotic creatures and when they see her, stop and tell her they like her paintings.

Teacher Niels Goerrissen said he loves the murals too.

"They definitely bring life to our campus," he said. "It has always had a drab, pinkish color, very instructional and uninspiring. I often see students looking at and, surprisingly, touching the animals as if to get the feel of them. They have certainly made a difference in the overall spirit of the campus."

Nichole traces her success to one person -- her now retired art teacher, Ron Kooper, father of Gulf's principal, who helped mold her career when she attended Redondo Union High School. The teacher helped her pin down a scholarship in the Otis Art Center's Young Artist Program and she believes remembering him helps keep her grounded.

The older Kooper guffaws, saying that he hardly had to offer much guidance because she was "comfortable in her own skin" worked diligently and never "over did or under did her work."

He claims it didn't have much to do with him - and all to do with her own skills at counseling herself and using her talent exceptionally well.


His wife, Eleanor, however, said Nichole, who has a twin sister, Lori Blackburn, a travel writer, wasn't excited by academics and found her niche in his classroom. Art opened her eyes and her world and she has stayed in touch with the couple ever since. Nichole and her mother also established a $1,000 scholarship for an "outstanding" art student at his former school in his name.

As time went on, the Koopers said they discovered she was an "extraordinary person" especially when she began her non-profit.

"There's no question about her talent," Eleanor said who added she has gotten to know the artist because she always stayed in touch with the family. "What she does professionally is amazing. And then this work she donates is amazing. We are both in awe of her talent and her humanity."

Another extraordinary person in Nichole's life is her mother, Sonia Blackburn, who drove the artist every Saturday morning to the art school. Her parents divorced when the sisters were in their 20s.

"My Mom would wait in her car for the whole day while I took my art class," Blackburn said. "I would always come out when class was finished and see homeless people trying to wash her car!"

Today, Nichole says without all this help she might never had made it. Those who know her personally believe she's a fantastic artist.

In the end, perhaps, the best to judge the artist works are the kids who they were made for.

Wrote student Abraham Lazo, 4th grade: "I think we should thank the lady who did it for us. She was doing the painting for like a month and she sketched it out with a pencil before she started. You can see turtles, killer whales, seaweeds dories and fish. It makes me feel good to see our school look nice. And we've even had some comments from parents."

Jefferson March, also in 4th grade, explained it this way: "The ocean had seaweed, starfish, seahorses, octopus, jelly fish, electric eels, all kind of fish and two killer whales. The painting of the rain forest had tigers, a waterfall, two giraffes, rhinos, zebras and vines.

"Those murals made me transform there."